Built by Atkinson-Walker wagons Ltd of Preston in September 1928 as one of their Class A.3 engines. After a short trial by the Clogher Valley Railway, it was found to be totally unsuitable. By the end of 1929 Atkinson-Walker wagons Ltd had gone out of business, and with no buyer to be found the engine lay idle at Aughnacloy coach and wagon shed until 1932. It was bought by Henry Forbes for the County Donegal Railway and converted at the Great Northern Railway’s Dundalk workshop to diesel power. It was fittingly named the “Phoenix” and worked on the County Donegal Railway till its closure in 1959. It can now be seen in the Ulster Folk & Transport Museum.

This is an unusual engine both for its looks and how it came about, and makes a very suitable subject to model for a narrow gauge railway. It may not have skirts but the amount of detail at each side of the footplate does a good job of hiding whatever chassis is used. The initial model was drawn up in 4 mm scale to suit the Halling motor bogie at either 12mm for 00n3 or 9mm for 009.

A further version being produced to suit the Kato 11-104 chassis in 009, this has a slightly reduced overall size to help it to blend in with the 9mm track and not look too top-heavy.
I have made it available in both 00n3 and 009 versions to print in Frosted Ultra Detail. It should also be possible to print in Strong and Flexible if required. If a suitable chassis can be found it is planned to make it available in TTn3 3mm scale also.

With Frosted Ultra Detail it is advisable to soak in “White Sprits” (Petroleum organic solvent – paint thinners) in order to remove the wax support residue left from printing, then a wash in warm soapy water should leave the surface ready for painting after it is fully dried. I use a grey or white spray primer to prep the model for finishing. In some areas, it will be necessary to remove print lines from the surface, and this can be done with a burnishing tool - I use a hardwood stick with a rounded point to get in the tight spaces. Do these processes before separating the print into its component parts so you will be less likely to lose any of the small pieces.

I have designed the bodywork and footplate in one, with the roof removable to allow for interior details and ballast to be fitted. A small exhaust and silencer, two work lamps and a pair of couplings are printed within the main body of the loco. These all need to be removed before the chassis is fitted.
Ballast
There are recesses in the sides to front and back of the cab openings which I have filled with lead sheet, at the front end (with the square windows) I have also added lead under the windows. This should give sufficient weight to the engine for traction and electrical pickup.

Fitting the chassis
With the Halling chassis it is a straight forward fit between the two pressure tabs front and back. It may be necessary to file a small amount off the inside of these tabs or add a shim on so you get a snug fit, but this depends very much on the printing process and is difficult to predict. The Kato chassis will need to be cut down to fit, the coupling mounts need to be cut off each end and also the axel boxes will need to be removed from the sides. I have added two small lead weights at each end of the chassis glued in place - this is not totally necessary but does keep the ballast low on the model.
Wire-work
There is not a great amount of wirework on this model; just the handrails each side of the cab door openings. For this, I have used 0.45 mm brass wire and drilled out the pilot holes to suit. They are, however,  not straight: the tops are turned to 45° outward, this makes them look straight when they are viewed side-on. See picture which may explain this better.
Couplings
A pair of printed couplings are supplied with the models. On the 00n3 they are printed under the footplate while on the 009 they are printed under the roof, along with the other small detail parts such as the exhaust and work lamps. For the prototype models, I have used one printed and one Greenwich type coupling on the 00n3, and both printed on the 009 versions.
Glazing interior details
For the windows I have used thin acetate saved from old packaging which is glued with a contact adhesive and is great if you have curved or awkward shaped glazing, being thin and flexible to use. I fit the glazing when building the model, and then fix it in place in the final stages after the painting is completed, and before any weathering is done.
Vacuum pipes
These are white metal from a Vale of Rheidol coach; supplied in sets by Dundas Models. I used two of the smaller one on these models.
Painting
After initial preparation of the model it was given a couple of light coats of matt grey primer then burnished and smoothed, with a final coat of primer to finish off. A base coat of matt white was applied before the cream was added (the grey is too dark for a cream base coat). After this had time to dry I used a mix of Revel No 36 red and No 331 red burgundy on the lower part of the body. The cream on the upper bodywork was a mix of No 5 white and No15 yellow. The footplate, roof, handrails, lamps and windows were all done in a charcoal grey No 9. I dry brushed a little silver around the mechanical parts under the footplate which highlights the details; also some gloss varnish gives the impression of oil on these areas. The impression of rust was added to some areas of the footplate, buffer beams and running gear with a dry-brushed application of Revel No 37 and No 85.
I have printed the C.D.J.C. logo on photographic semi-gloss print paper, which has allowed me to size and print to suit 4mm scale, and have then fixed it to the model with Cyanoacrylate (super) glue. The print is sealed with a coat of matt varnish which softens the edges fix the print and helps bond it to the finished model.
Graphic details
I have used 2mm white lettering for the “PHOENIX” name; these are from Fox Transfers ref F-G1003 Franklin Heavy 2mm & 1mm. With the aid of a piece of masking tape which had index marks for each letter I was able to place the individual letters straight and at the correct spacings on both sides of the cab, the “OE” arrangement being the fiddliest as the “O” is cut vertically and joined to the front of the “E”. The other point to note is that there are only two letter X’s on the Fox transfer sheet. As I was making two models this left me two short. I overcame this shortfall of letters by cutting the bottom leg of two of the Y’s and joined them together one part upside down.
The number 11 plates on the upper cab sides were drawn to scale and I asked Narrow Planet to produce a pair of these brass-etched plates for each model. After painting the background in a matching red to the lower bodywork, the number plates were added to each side of the cab, fixed in place with the Cyanoacrylate (super) glue.

After adding the decals number plates and logos, the final little bit of detail to add was the work lamp lenses. For these I used 2mm Clear Rhinestones, fitted after painting was completed.
I finished overall areas with a coat of matt varnish. I then added weathering with powdered wax pastels, using mixes off orange, brown and black, to give the engine an overall weathered and well- used appearance.
﻿ 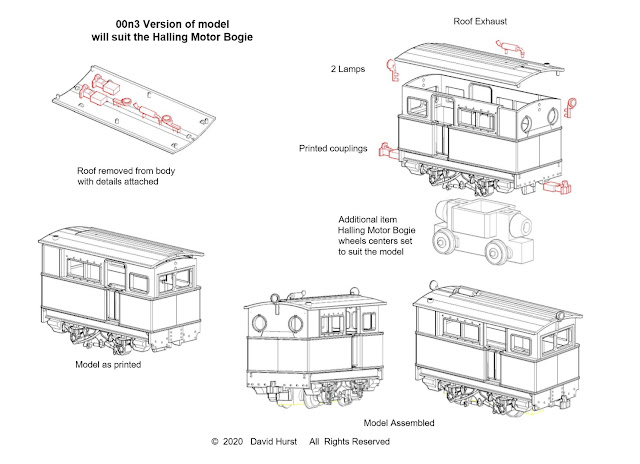 In early 2020 Kato introduced there new and updated versions of their popular 11-103 and 11-104 chassis, these are now phasing out and being replaced by the 11-109 and 11-110. With this change, I have made some simple alterations to my models using these chassis.
If you would like a copy of this model it is available on Shapeways at Model Engine Works: 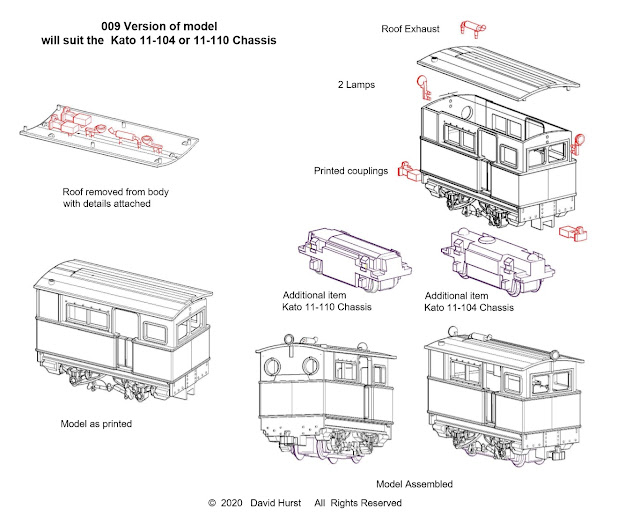