I have been working with Paul Titmuss again this time to produce a freelance 3 foot gauge Diesel loco. A combination of two small industrial engines, the foot plate, bonnet and chimney come from a Hudswell Clarke used at Davyhulme sewage works, and the cab comes from a Fowler used at Marland Clay Pits. This blend of two small industrial locos has been used to produce what might have run on the 3 foot gauge Castlederg and Victoria Bridge Tramway, if they had gone ahead and purchased a Hudswell loco in the 1930s.

We again worked around the Halling motor bogie with 9mm wheels at 12mm gauge and set at 23mm wheel centres. This did mean that the bonnet had to be wider than the Hudswell Clarke images indicated and has given the engine its own look, different from the donor locos.

The plan was to make this a multiple part model - foot plate, body, roof and radiator grill. Holes would be made for the bonnet door handles and hand rails both at the cab door and bonnet sides. These holes could be filled if they were not required, but are much easier to use than setting out and drilling for holes on a blank model.

With the radiator grill being loose it is possible to exchange the printed grill for a brass etched mesh to give the engine a more bespoke look. This is best pre-painted and fitted before the body is fixed to the footplate.


Wire work
The wire used is 0.45 mm on the 4 mm scale and 0.33 mm on the 3 mm scale model, and it is fixed with cyclonic type glue. Note it will be necessary on the Strong & Flexible plastic models to drill out the holes with a suitable size drill as the printing process can leave residue in the pilot holes.

All of the proto type models have small bent wire handles on the bonnet doors; these are inserted in the pilot holes formed on the model and glued from the rear. The cab hand rails have been formed by bending a D-shape in the appropriate wire and using the holes provided in the cab, passing the wire right through and gluing from the inside. It is best to do all of the wire fitting with the body separated from the footplate.

For the bonnet handrails Paul and I have used different methods - which the model allows for. Paul has used the three top holes on each side of the bonnet and added small hand rail posts and wire. I used the four side holes with wire only, and formed a pair of a D-shaped handrail sections to locate in the end holes. I then passed wire right through the bonnet in the middle holes, just sticking out enough to form the mid supports. I have glued the wire in place and this has made a robust handrail with two mid supports.

Cab Details
Paul has added a level of detail to the cab interior including a reversing lever and brake.  The production print in 00n3 will have holes for these so they can be added to the footplate inside the cab. It will also have a more closely fitting footplate to the rear fly wheel of the chassis, which should give more floor area for crew and details.

Couplings
We have tried a few variations on these models; Paul has a specific height to maintain for his existing rolling stock so he has used a standard Greenwich coupling. A pair of printed couplings comes as part of the footplate on the 00n3 print.

I have used the printed couplings from the 009 version on the TTn3 model to see how they perform and RT Models 4NLP005 Penryhn Locomotive couplings in white metal on the 009 version. This required the holes provided in the buffer beams for the NEM pockets to be filled with small rectangles of Plasticard. I plan to print all of the versions of the model with base couplings.

Ballast
All of the prints have weights added: as much as possible to the footplates; the rest as low down on the body as possible. This will keep the centre of weight as low as possible, and prevent the model being top heavy.

Maker's name plate
I have had a bespoke “Hudswell” maker’s nameplate etched by Narrow Planet to suit the 00n3 and 009 versions of the model. This sits on the curved flat area above the radiator, and will hopefully add that finishing touch to each of the 4mm models. It is possible to order one of these separately from Narrow Planet should you want to add one to your model.

Painting
Paul will be building the 00n3 version of the model in Frosted Ultra Detail, and I will work on the 009 in White Strong & Flexible Polished and the TTn3 in Frosted Ultra Detail. We have both had our own ideas for the paint scheme on the locos. Paul has chosen to go with the dark green as used on his Clogher Valley Tram engines; this diesel will eventually be used on the same layout, yet to evolve. I, on the other hand, have decided to go with a black finish on the 009 engine using what is actually a dark grey Revel No 9 paint; and a dark blue Humbrol No 104 on the TTn3 engine. Both have black/dark grey footplates, and both will have red buffer beams at front and rear. The 009 has a more worn industrial look about it - I hope this will help to show the very different looks that can be achieved with this print. 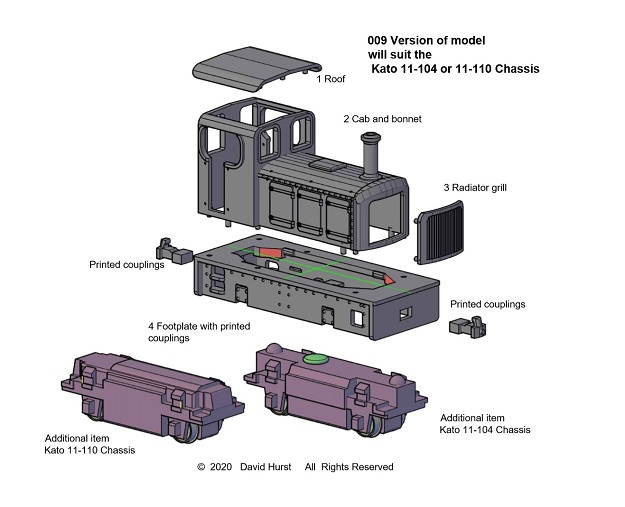 In early 2020 Kato introduced there new and updated versions of their popular 11-103 and 11-104 chassis, these are now phasing out and being replaced by the 11-109 and 11-110. With this change, I have made some simple alterations to my models using these chassis.

If you would like a copy of this model visit Model Engine Works at: