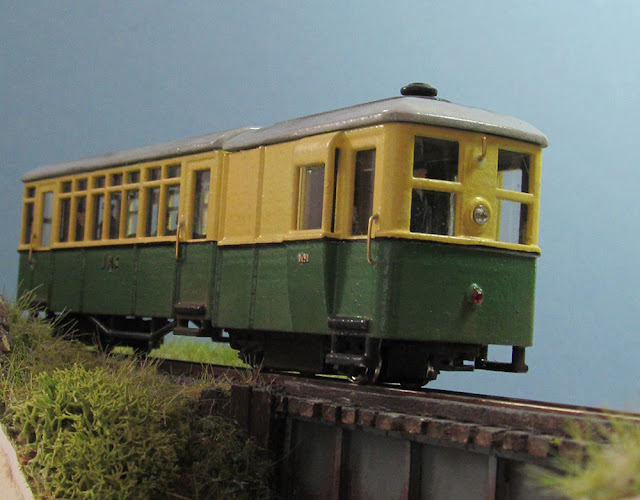 The Pioneer 1 took its first trip on the Jersey Railway Company’s line on the 18th June 1923. The makers Cammel Laird had developed this type of railcar to run more economically for the smaller railways and branch lines.
The J.R.C. railcar was 56' 6" long and weighed in at just over 15 tons. It consisted of a steam tractor unit with a 2-cylinder engine controlled in the forward direction by the driver- come- fireman, and in the other direction, a guard had control. There was a capacity for 64 passengers seated in first or second class.
Three of these railcars were used by the J.R.C; their benefits were obvious in that they used 5lb of coal per mile, compared to the 25lb that the company’s engines used.
The model of this railcar was a commission by a colleague at work, who having made regular visits to Jersey had learned about the two railways that had once existed on the island. He had decided to model a layout based on the Jersey Western Railway after it was re-gauged from standard gauge to 3' narrow gauge early in its existence.
J.R.C ran four 2-4-0 tank engines for most of its lifetime, a fifth one proved too heavy for the track and being little used after the Great War was sold on. Three sentinel steam railcars were also employed from the early 1920s until the line’s closure in the mid-1930's.
This was a perfect opportunity to put into practice all I had learned in developing the 009-gauge version of the Clogher Valley Railway articulated railcar and apply it to something different. I would use the same basic set up of chassis and rear bogie as we were still working in 009 gauge for this layout.
We took the decision to scale the length down from the 56' 6" to something around 40' which we felt would work on the layout planned much better. 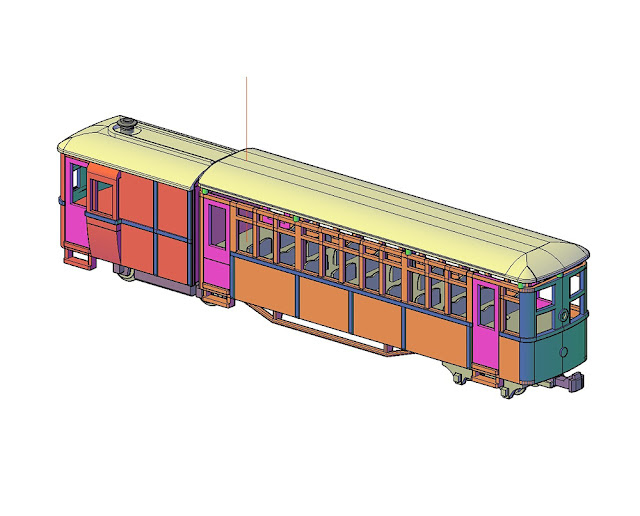 I further adapted this and produced a shorter version still at around 33'. This was done by keeping the tractor unit the same and reducing the coach body. I plan to offer the smaller version for sale on Shapeways. 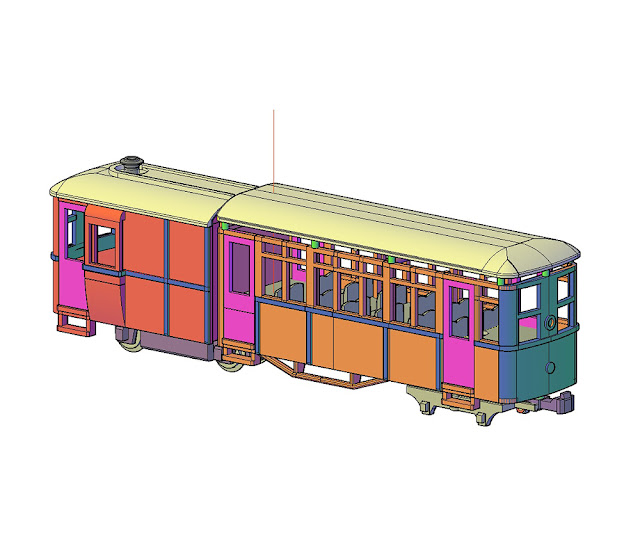 From the start, I had decided to develop this model to be printed in Strong White and Flexible Polished plastic as it suited our budget, and will still print in the more detailed Frosted Ultra Detail if we decide to later. The design being quite simple and uncluttered did make this a workable option.

As off November 2017, we have made this model available on Shapeways in the Frosted Ultra Detail plastic. 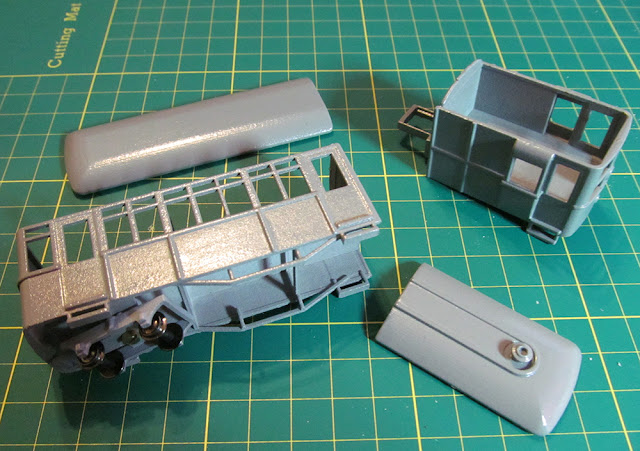 This model is formed in two parts: a tractor unit, body and roof held together on spurs, and the coach in three parts; body, roof and bogie again kept together on spurs. I have allowed for the fitting of a Peco NEM coupling pocket on the front of the tractor, and the bogie also has a socket for one at the rear. On the prototype, a trailer was used at busy times so it may be an option to work on this later. 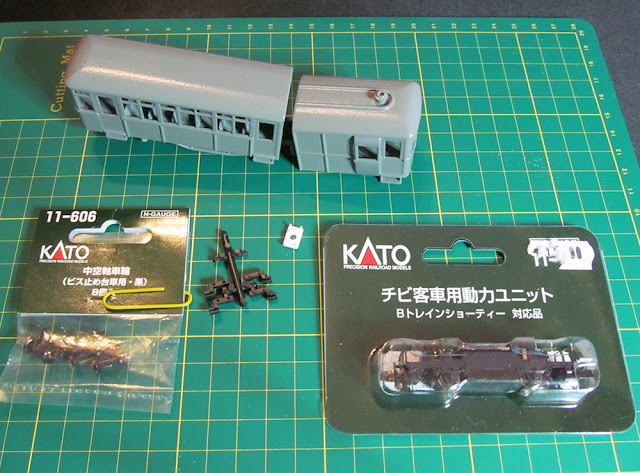 A small change to the bogie on this model was to allow for the fitting of Kato 11-606 wheels, the axles on these being slightly narrower and the wheels being 0.6 mm smaller in diameter than my previous choice. This has meant repositioning the pivots in the axle box to suit the new wheels.’ 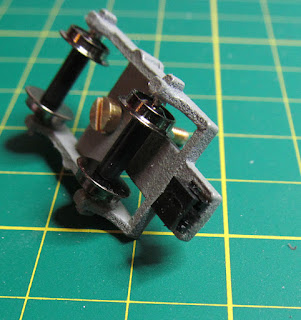 Using the trusty Kato 11-104 or new in 2020 the 11-110 chassis is a straight forward fit a small frame printed in the cab bodywork, which clips onto the chassis intended mounting points. 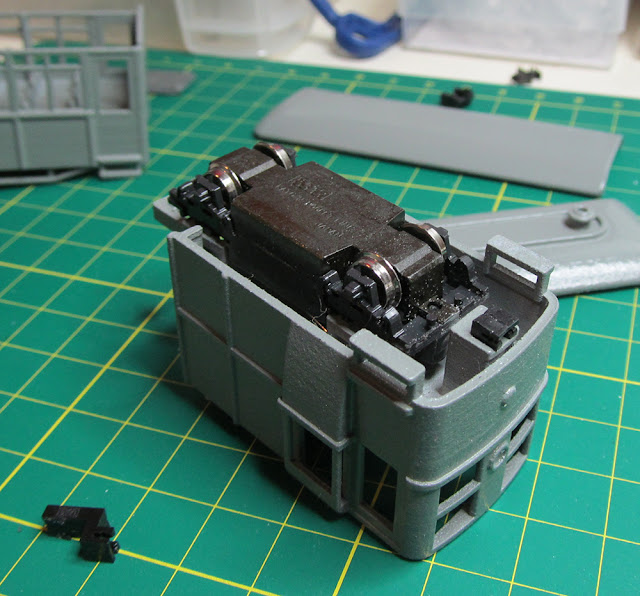 The only modification to the chassis is that the two balconies including the couplings need cutting off. Again the pivot plate is loose in order to allow for adjustment between the cab and coach body to suit the curves on individual layouts. I have now modified this to clip in place so that when in use you are able to adjust the pivot centre to suit the curves on a particular layout. If you want it fixed it can still be glued in place. 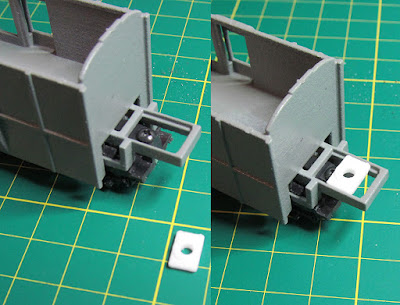 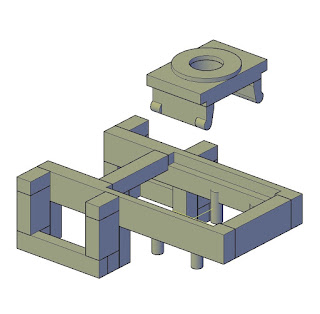 Making the roof removable allows for interior finishing, the adding of glazing and figures, with a little more ease. I have incorporated the upper backs of the seats in the coach to add a little interior detail, though these are not as easy to finish within the body of the coach and it does bring the cost of the model down having fewer loose parts.
The tractor unit has an uncluttered interior into which some details can be added if required. There are small round hollows formed on the front of the cab for 2mm rhinestone beads to be added as lamps, which I like as they give a sparkle to the lamp that I cannot get with paint alone. 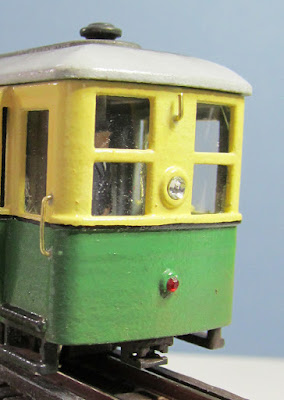 Separating the parts
My first job was to separate the bogie from the coach body and roof, then the cab body from its roof. I did this using a razor saw and because all the components are quite rigid this was not too difficult; once the parts are loose it is quite straightforward to remove the remaining spurs. I then went about priming all of the parts and removing any layering that was evident. Fortunately, the polishing process does do a good job in reducing this, so three or four thin priming coats sprayed on with a bit of burnishing with a hardwood stick between coats did the job. 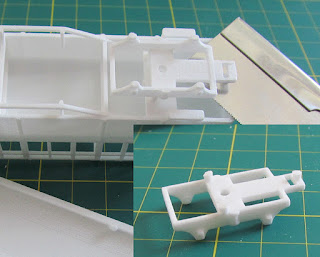 Adding interior detail cab
As the cab is quite devoid of interior detail I decided to add a mockup of a two-cylinder engine boiler and the driver- come- fireman. With a little research on similar Sentinel units, I came up with a rough outline for the engine and boiler. This was pre-finished in a toned down black with a red flywheel and gunmetal details, then fitted into the cab along with the crew and glazing. Probably a lot more than is needed considering what can actually be seen. Well I know it’s there. 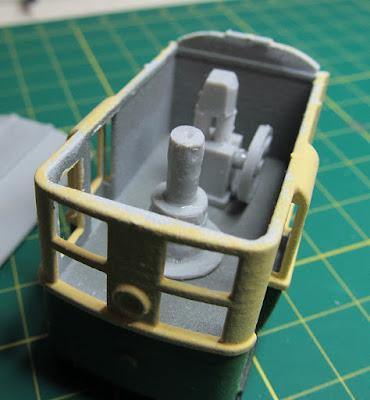 Adding ballast
I add two narrow strips of lead to the cab section over the chassis, and two smaller strips to the bodywork of the coach each side of the rear bogie. This greatly improved the running of the whole unit and allowed it to pull a small trailer coach and a box van.

Fitting the wheels and bogie
The chassis clipped into the mounts perhaps a little tightly so I eased this with a small file. It did not take a lot on this print but I do find that there are slight variations in the S.W.F. prints that cannot really be anticipated. The Kato wheels were again tight for the bearing cones, so I have a small flat bit adapted to polish the bearing cones out and make the surface smooth for the pins to run in. Even though I had the print polished these areas seem too small and tucked away to reach successfully. 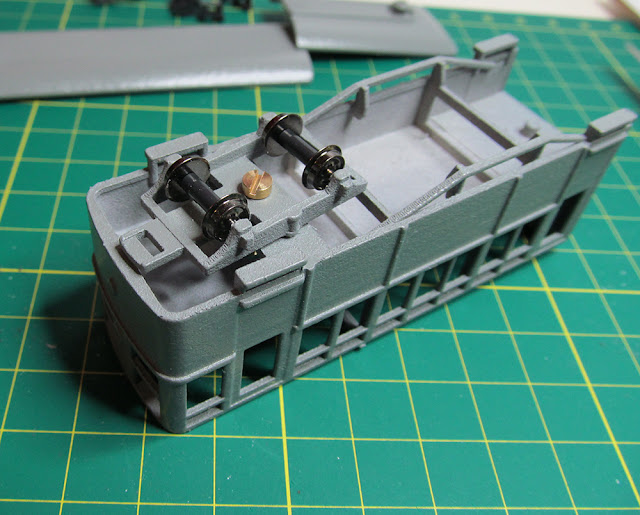 Painting of the railcar
I decided to paint the railcar in the later livery, though it is debatable as to the exact shades of yellow and green it was painted in. Mixing a pale mustard yellow (Humbrol Matt yellow 154 + white 34) and a toned down mid green (Humbrol Satin 131 + matt grey 106) looked a good combination, with a light to mid grey (Humbrol matt grey 106 + white 34) roof and toned down matt black (Humbrol Matt black 33 + grey 34) underframe bogie and steps. The interior was left in the mid grey primer that the whole model was based out in. I applied four thin coats of this matt grey primer which did improve the surface finish, filling most of the layering evident on the roof. As I was using a light finish colour, I applied a final priming coat of white after masking the windows from the inside. Once two thin brushes applied matt topcoats were applied, I added a finishing coat of gloss varnish before applying water slide transfers and the coach line, which I added with a Staedtler black permanent Lumocolor pen. A final coat of satin varnish over this to seal the whole model. I used a bit of black crushed up wax pastel to dirty the roof and some burnt umber to give the lower sides and running gear a used look. This was applied with a soft No 6 size paint brush, just rubbed in where needed. The good thing about using the wax pastels is that you can clean it off and re-apply if you like. 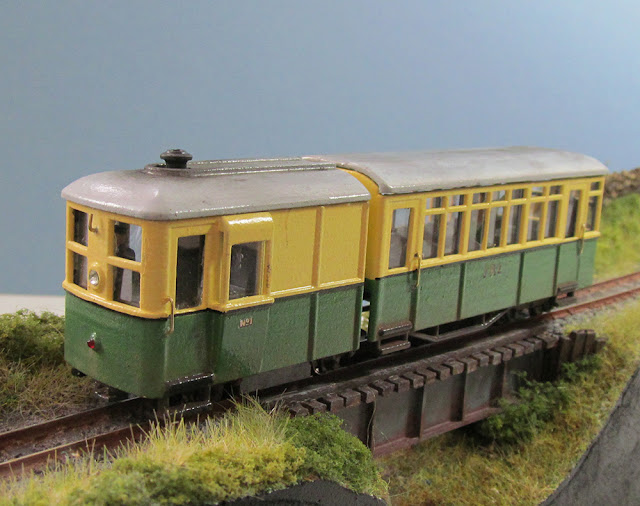 Adding Glazing
This was done using some reclaimed acetate sheet form old packaging I had saved.    I made card templates of each section first to get the fit right, then cut and added the acetate, bonding this in place with contact adhesive. 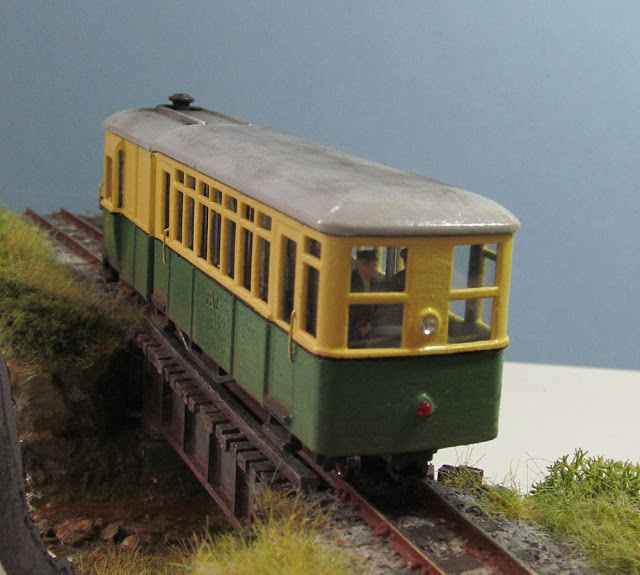 Final details
The final bits to be added were the handrails and the front whistle. These were done with 0.45mm brass wire bent to shape, suitable holes were drilled in the bodywork and the wire added, then superglued in place. 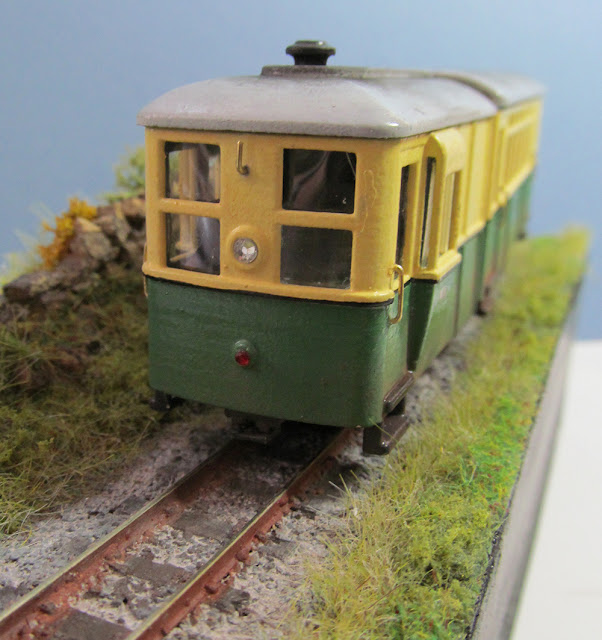 I you like this model and would be interested in a print I will shortly be releasing
it on the Shapeways market place at:
http://www.shapeways.com/shops/model-engine-works