3D print of this engine is now available at Model Engine Works on Shapeways.

One type of engine that sums up a typical Welsh narrow gauge engine to me, is the small saddle tank such as the Kerr Stuart 0 4 2 Edward Thomas. This was built for the Corries railway and later moved to Talyllyn when the Corries line closed. 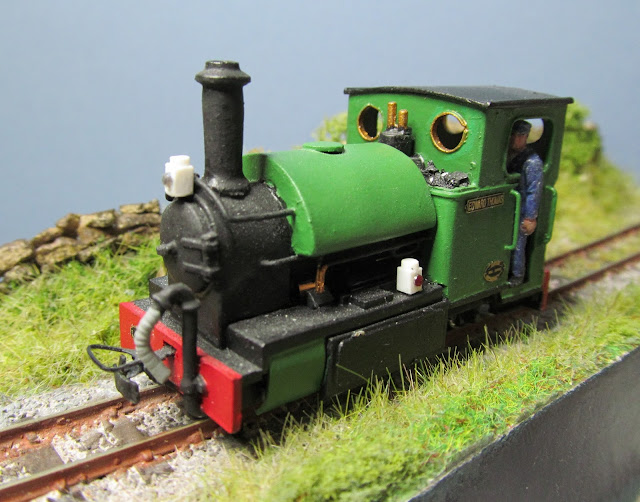 When my interest in 009 was rekindled a few years ago after a long lapse, I started scratch building rolling stock and engines like my original ones, and after a little practice I decided to have a go at my own version of Edward Thomas. As I was looking to build something in this style rather than recreating the actual engine, there were possibilities to make a few changes to the model and still keep the look and spirit of that style of engine. 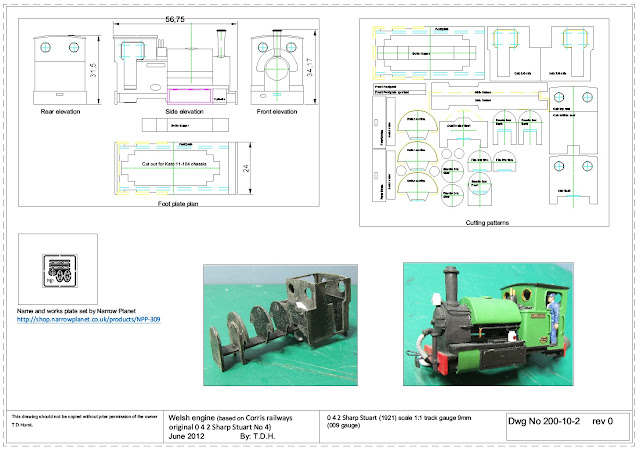 I got as many reference pictures as I could find together and also one of the Kato 11-104 chassis. These are very good when getting into building 009 narrow gauge engines as they are so reliable and inexpensive. 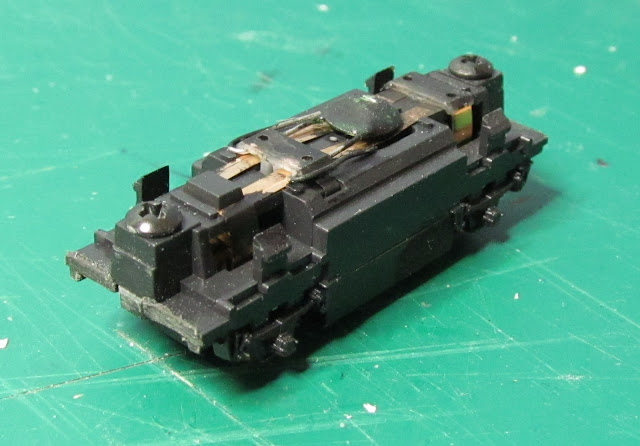 I started by making a mock-up footplate, to get the right sized opening to fit the chassis. Once I had that sorted I made a few scale drawings of the bodywork, using the pictures as guidance. To get the cab to look lower than the foot plate it was necessary to cheat, by adding sides to the foot plate inside the cab entrance. I planned to disguise these by painting them matt black.

My plan to hide the chassis was to add part side plates and show the rear wheel like the pony wheel on the actual engine. I must admit this is not my idea, but a really good solution. I had seen it on a blog post by a fellow modeller Michael Campbell who used it on his Kerr Stuart Skylark:
http://michaelsrailways.blogspot.co.uk/2012/10/a-little-bit-of-skirt.html

To make the body I printed some paper patterns - these were temporally fixed to various thickness of plasticard with Pritt stick. This holds them long enough to cut out and the paper then just peels off afterwards. The saddle tank was the most complex bit to form, I made a series of formers and linked them together at the base, and then using two thin plasticard laminations over them I formed the upper skin of the tank. I did the same with the smoke box.

The chimney was made using lime wood and turned in the chuck of a small electric drill. 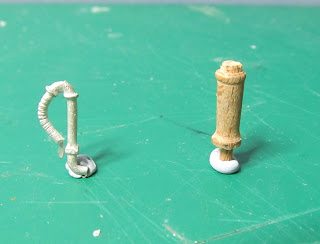 If I had known about the “Gem 9104” white metal OO-9/ Industrial Loco Fittings beforehand I would have used one of these chimneys. I know for next time now.
http://www.lytchettmanor.co.uk/lytchett-manor/oo-9-couplings-fittings 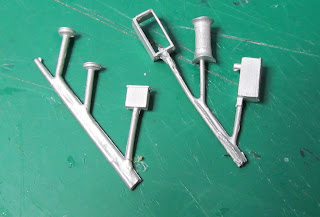 The smoke box door was made up of several discs of plasticard sanded to shape whilst the hinges and handles were added using spare bites from an Airfix 040 saddle tank kit. I formed the spectacle windows by drilling an oversized hole and lining this with strips of thin plasticard sheet to give the impression of a brass frame when painted. I made use of a pair of vacuum pipes from a Vale of Rheidol coach that I had spare. 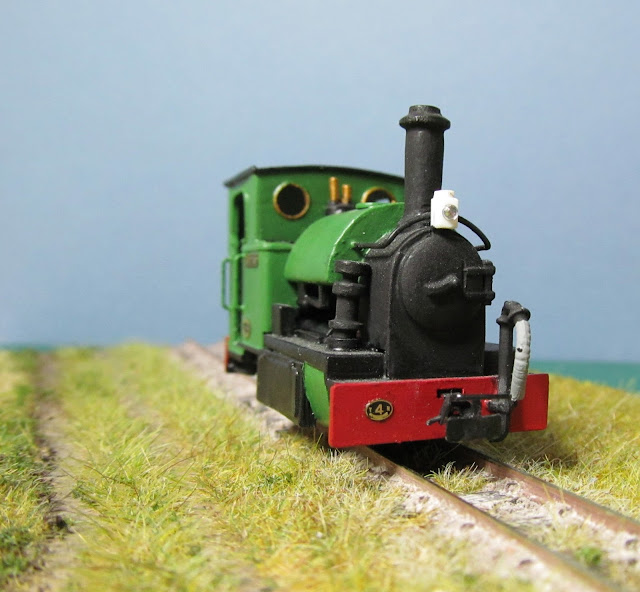 To further hide the footplate side I used a Dapol track side figure: I shortened one of the legs to fit on the footplate inside the cab, and the other one which is seen was thinned down on the inside to look as though standing at the edge of the cab step. This made the figure look to be standing on a lower level footplate. 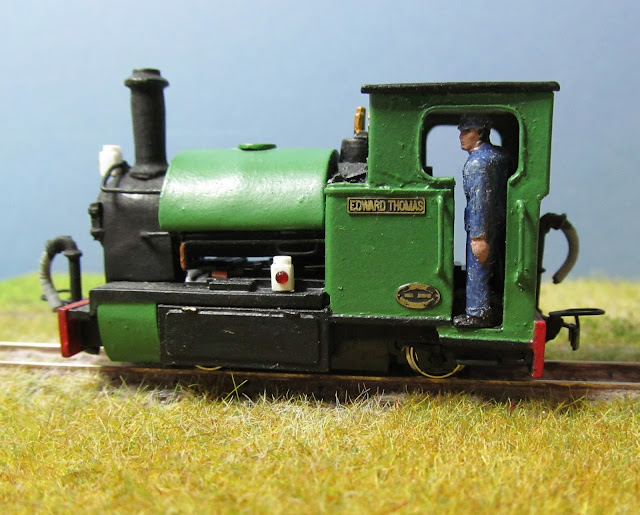 I made the lamps in bulk some time ago using white 1 mm thick plasticard rectangles to form a 3 x 2 x 2mm block and then added a 2 diameter x 1mm  disk on top. For the lenses I used a small 2mm clear or red rhinestone.
The paint was a mixture of various Humbrol greens with a final coats of matt adding to the footplate and smoke box, then satin varnish added over the other painted areas. I used real crushed coal in the bunker – you need to get this almost like dust at this scale to look right. The finishing touch was a set of name and works plates from Narrow Planet who do the complete set for Edward Thomas.
http://shop.narrowplanet.co.uk/products/NPP-309 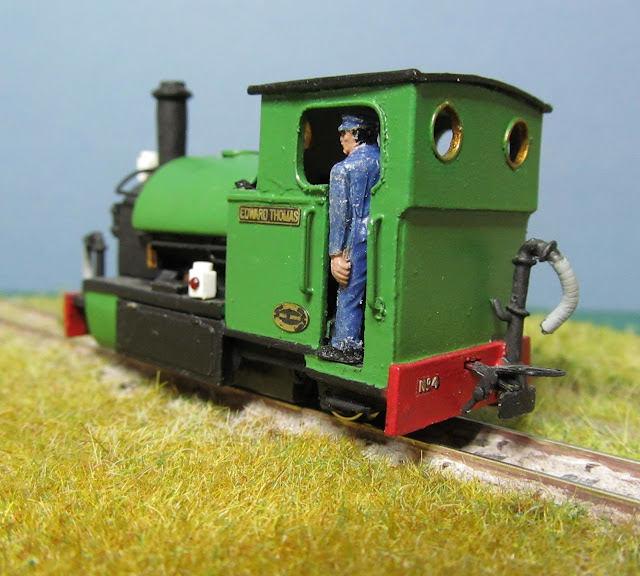 Although not the best model of this engine you may find, I am pleased with the result-it has been a good practice run for me. I'm thinking of getting an N-Drive Productions chassis for my next attempt at this or a similar engine.
http://www.n-driveproductions.com


This engine based on the Kerr Stuart “Tattoo Class” is now available as a 3D print to run on the readily available Kato 11-104 chassis. It has separate footplate body and roof to allow for interior details to be added, there are also a pair of simple couplings printed under the footplate of the model.

Additional details will be needed to complete the model as shown, these include smokebox door handles, cab side handrails and working lamps.


If you would like a 3D print of this model visit Shapeways at: